Reading Crisis, Part 4: And Thus Shall The World Die! 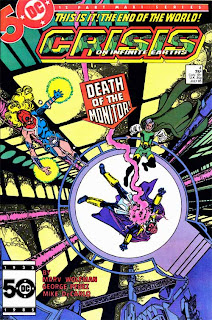 Crisis on Infinite Earths -- Part 4: And Thus Shall The World Die!

Wait, what happened to the cliffhanger?!  Well, that was sort of a cop-out, that Harbinger wasn't super ready to kill The Monitor.  At least it does get resolved later in the issue.

Anyway, the Supergirl and Batgirl conversation was really nice, and it mirrors the Superman/Batman conversation from a few issues previous.  However, this scene does unfortunately demonstrate how insanely impractical Supergirl's costume is for fighting crime, or just flying around in general, as Perez nearly gives us an upskirt shot.  But I liked the two of them talking as there is a certain charm to seeing the two of them palling around.

This issue unfortunately introduces the first instance of the cliched criticism of this series in the scenes with Pariah with Lord Volt and Lady Quark.  I have absolutely no idea who these characters are or why I should care beyond the fact that Pariah teleports Lady Quark away.  But as far as to what importance these character have, I've got nothing.  Looks like I will be off to Wikipedia.

The whole Dr. Light origin story seems like an odd interlude.  Is it wrong that her origin makes me think of Golden Pharaoh from the Super Powers toys? And, yeah, Dr. Light is a real jerk.  The scene with her yelling at the Teen Titans and Outsiders in Japanese seems designed to make her unlikeable, especially when paired off with Earth-2 Superman.

I love Firestorm in this issue.  He and love-struck Killer Frost's banter is great, and Firestorm's remark wishing that Psycho-Pirate could have made her fall in "like" with him instead and that would have been fine made me laugh.  The short appearance from Shining Knight made me smile, too, and made me think of his time on Justice League Unlimited.

This issue gives us our first Hawk-sighting, a cameo by the Earth-2 Hawkman and Hawkgirl.  Woo!

I had no idea that Red Tornado had any real role in this story.  That element has my interest piqued.

man, Pariah does a lot of crying.  I want this guy to man up at this point.  And unfortunately, The Monitor makes the same mistake which super-geniuses always make by being too cryptic instead of speaking plainly.  The death of The Monitor is something, but what comes afterwards is a substantially bigger impact, with Earth-1 and Earth-2 being vaporized into nothingness, fading to white, and then fading to black.  The "white out" reminded me of Zero Hour, which looking back at it now is a clear callback by Jurgens.  I mean, you're a third of the way through your series and you destroy the two main Earths on which DC published comics take place?  That's called throwing down a gauntlet.  I can imagine grabbing this from a comic shop in the days before the Internet, then reading it and going completely insane.

Overall, this issue was less enjoyable than the first three in one way (too much with characters either just introduced in this series or otherwise unknown to me) but just as enjoyable in another way (how can you not like the annihilation of Earth-1 and Earth-2?!)  This one has a hell of a cliffhanger and that alone makes me want to see where the heck we go from here.

Oh yeah. I guess this was where all those hated Wolfman/Perez co-creations started rolling out. I appreciated their creation of two powerful new heroines, but who would claim to be fans of either.

Dr. Light confused me because I've waited a quarter century for her to turn out to be a bad guy. She took on the name and costume of an early JLA villain for no good reason, then never displayed the presumed bad one, either. What a gyp!

I kind of like Lady Quark, mostly because she was the ballbusting powerhouse of L.E.G.I.O.N. That said, she tended to be conveniently useless in most adventures, and being a mopey jerk was her sole characterization. She also would have been better as a villain. Her universe died for spectacle, but she never did because... because... because?

At least somebody did Harbinger in after she proved a completely extraneous yet briefly omnipresent nuisance.

Dr. Light is pretty meaningless as well. I was not familiar with the original when I first read this new one, so the irony of her being a hero never meant much. And she is almost universally portrayed as a jerk, so in my mind I sort of figured she's a gender-swap of Sunfire. The costume looks nice at least.

They killed off Wildcat II toward the end of the Eclipso solo series. She was your typical cattitudinal chica, which was why there was a longstanding theory that Yolanda Montez had been reborn as Pantha somehow.