DC Comics To Relaunch After Flashpoint

As reported on Newsarama:

Maybe I am predictable, but my first response is one big giant UGH!

Why the heck did I just invest time and money in Brightest Day to see the return of Hawkman (and, for a while, Hawkgirl) if you were going to flush it all away and start over?!!

And Jim Lee redesigning the costumes of 50+ characters?  Coming soon -- every superheroine in a choker chain and leather jacket! 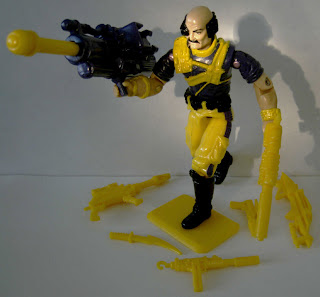 Disposable income can be a bad thing.

For one thing, there is this site called eBay, where people of a certain age can spend that disposable income on things called Toys From When We Were Kids.  And unfortunately, once one opens this door, it can be very difficult to shut.

Now, for some background.  As some of you may know I am a big fan of GI Joe: A Real American Hero.  Have been since I was a kid and I watched the Weather Dominator miniseries.  So the toys have always been something I have been interested in.  And one of those toys which I had as a kid was Cobra's resident mad scientist Dr. Mindbender.  And I have always been a fan of that character and the toy, so recently when I had the chance to pick up the second version of Mindbender, I snapped it up.

By 1993 when this figure was released, the Joe toy line was subdivided into several subgroups -- including the Ninja Force, the sci-fi Star Brigade, the Play-Doh armored Mega Marines (don't ask), and the general Battle Corps group, to which this Mindbender belongs.  And as is appropriate for being part of the Battle Corps, Mindbender is in his field gear, ready for front line combat.  The colors are a little garish, but for the early 90s I think they work well.  Definitely a memorable combination, and the purple at least ties back to the original figure.  I like the head sculpt, which is clearly identified able as Mindbender even without his monocle.  (Interestingly enough, there was going to be another version of Mindbender in the vintage line which would have shown him with the scars of having the implants he is sporting here removed!)  The black boots are very nice as well.  I also really dig the comm-pad on his wrist, a nice detail.

Gear is something of a mixed bag.  As with all of the other toys in this year, Mindbender comes with a ton of weapons to choose from, along with the ubiquitous spring loaded launcher.  Personally I have him armed with the jagged dagger and pistol, because I can't see Mindbender using a machine gun.  Still, with all of these guns you can find one which you like so I give that's a thumbs up.

Overall, I like this figure.  I had gotten out of Joe in 1991, so I never had any of the toys from this line.  Things had gotten a little silly at this point with aliens and monsters and giant robots, but the Battle Corps subline was pretty straightforward and produced some quality figures.  As a fan of Mindbender, I like having a version of the Mad Doctor with a shirt, amongst other things.  I can see this version of Mindbender directing a BAT assault on the Joes or wearing gear like this when he was stealing the DNA to create Serpentor.  Mindbender is more at home in lab but this is GI Joe and everyone has to fight sometimes!  So now my classic Mindbender and 25th Mindbender have some company on the shelf in the form of Battle Corps Mindbender.

Image source: Yojoe.com
Posted by Luke at 1:14 PM No comments:

Some tight Flash kicks by Devin.

Mister Bones has a RAD contribution.  No, really!

Shag showcases the Nuclear Man in a Picasso style!

And finally, Frank spills on why Red Tornado sucks.

Fair Trade: For Your Eyes Only 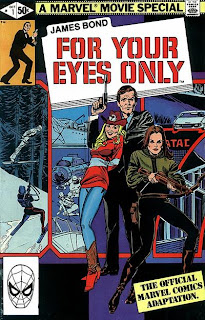 I am so far behind on my Fair Trade posts that I am going to start making them shorter.  So, graphic novel, away!

For Your Eyes Only -- I picked this one up at Mr. K's in the form of the Marvel paperback version of the film adaption from 1981.  The paperback format is nice in that it lets me read the book at work, but otherwise it does not always work out well for the story, as questions and answers and other dialogue exchanges can be difficult to follow.  Still, as an adaption of one of the most low-key James Bond movies, this succeeds very well.  The art is by Howard Chaykin, and while I never would have placed Chaykin as a Bond artist, he fits well.  Larry Hama of GI Joe fame adapts Maibaum and Wilson's script admirably.  There are no extended sequences or "deleted scenes;" in fact, there's a few scenes which have been simplified from the film version.  The most notable of these is the biathlon chase sequence, which now is much more succinct.

It's interesting to read a comic adaption of FYEO if only because there are so many other Bond films which would lend themselves to comic book form much more readily.  But there have not been many James Bond comic adaptions over the years for whatever reason.  Why did this one made the cut?  I do not know the answer to that, folks.

Anyway, if you see this one cheap at a used book store, pick it up.  It's a quick read but a fairly solid adaption of a strong movie.
Posted by Luke at 8:21 AM 1 comment:

Coming up on the holiday weekend, its a perfect time to buy some comics!

Magnus, Robot Fighter #4 -- Yikes, when did the last one of these come out?

The Strange case of Mr. Hyde #2 -- Scotland Yard must battle evil with... evil!

Iron Man 2.0 #5 -- Will Rhodey's new armor be enough to tacke the threat of Palmer Adley?

Charmed #9 -- What does the new Source have in store for the sisters?

It's been cold and rainy this week in South Carolina.  So curl up with some good comics and stay indoors!

Dong Xoai, Vietnam -- I passed on this Kubert graphic novel as a hardcover, but as a trade paperback this is looking good.

Justice League of America #57 -- Eclipso is running roughshod over the JLA and things are only getting worse.

GI Joe: A Real American Hero #166 -- What new plan does Cobra Commander and his band of snakes have in store for the world?

Invincible Iron Man #504 -- You know what I fear?  Summer events I have no interest in.

Darkwing Duck #12 -- Can Darkwing escape from the clutches of F.O.W.L.?

Flashpoint #1 -- At least this is the reason this time.  I think I ordered the first issue.  I don't know, alternate universe mega-events don't appeal to me much anymore.  And this one seems very much in that vein - a disappointment after how much I dug Blackest Night.

As is the tradition, I swung by Borderlands in Greenville, SC this past Saturday for Free Comic Book Day!  Borderlands was my LCS for a long time, starting in 2006 when I moved to the Upstate, until it got to the point where money was tight and I had to switch to a mail order service.  Earlier this year, the longtime owner sold the shop, and in the few times I have been there since some changes have been evident.  New bookshelves, new layout, a reading couch.  That sort of thing.  So I was not prepared for the huge change in the handling of FCBD.

Stan never seemed to make a big deal out of FCBD.  The freebies were up front, and there was a sale.  Pretty straightforward.

I knew things were different this year as I got to the light on Laurens Rd and there was a giant inflated ape standing in front of the shop.

I have never seen the shop this packed with people.  Just people everywhere.  Even the Big Annual Sale doesn't draw crowds like this.  A line snaked around and through the store and out the front door just to get the free comics.  (Of course, it snaked past the new comics racks and the trade shelves, natch.)  In the shadow of the ape outside, there was about a half dozen local artists doing sketches and signings, with an appropriately large crowd as well.  Strangest of all was the Mjolnir cake in front of the register, although considering the cakes at the BAS this year I shouldn't be surprised.

Needless to say it was pretty insane.  What I expected to be a 10 minute stop turning into an hour-plus of waiting on line to discover that they barely had a third of the free comics even available.  Hrrn.

I will say this though, my crotchetiness not withstanding: there were a lot of kids there.  I mean a lot of them.  A mother in line behind me asked how the free comics worked (my response: "Well, they're comics which are free.") and said that her boys loved comics.  Judging from the kids running around with various comics and collections in their hands it seems like that sentiment might have been widespread, and that at least is good.

Now for the loot:

War, What Is It Good For? -- I finally picked up Showcase Presents: The Unknown Soldier, taking advantage of the 40% trade sale.  I have become a sucker for War books and the DC ones are some of the best.  Unknown Soldier is a great concept for a War character because you really can put him anywhere in the conflict and tell a story with him.  Unfortunately though I also have a ton of other phonebooks to read, so who knows when I will get to this one!

Wonder Woman -- I know what you are asking -- Wonder Woman?  Something of an odd choice for me I know.  But as I wound my way through the store, we passed the 3/$1.00 bins and I saw a late Bronze Age Wonder Woman comic in front.  So I started flipping through it.  In it was a decent run of the very late pre-Crisis WW stuff, including some of the books by Roy Thomas and Gene Colan, which I just recently read about in Back Issue magazine.  So I grabbed a few and said what the heck, picking up issues #284, 289-290, 295, 297, and 299.  I like Wonder Woman even though I have only read a handful of her stories, and these looked pretty interesting.  Plus I figure if I don't like them they can always get donated to the Children's Hospital at some point.  Plus I knew Frank would be proud of me, heh.

When You're Feeling Down and Woozy... 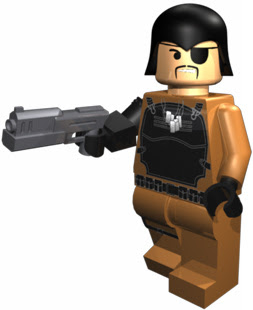 ... Slap a fresh clip in your Uzi!
Then assume the proper firing stance,
And make those suckers jump and dance!

I know there was the Built To Rule toys several years back, but man, a Lego GI Joe would pretty much be the cat's pajamas as far as I am concerned.

Courtesy of The Legion of Minifigs!
Posted by Luke at 11:06 AM No comments:

It's hot and rainy and muggy here in the Upstate.  You know what means... time for comics!

(What?  You're just mad that there's no clock in your hat.)

Doom Patrol #22 -- Is it cliche to say that this title is doomed?  Or just, you know, accurate?

Weird Worlds #5 -- I wonder how Garbage Man is going to deal with Swamp Thing's new status... ?

Uncle Scrooge #403 -- The baddest duck on the planet is still kicking it old school, baby.

Putting The Issue of Birthplace to Rest... 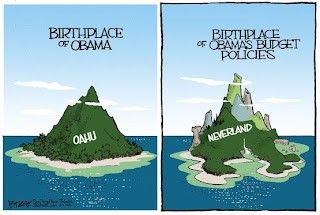 Thanks to Newsbusters!
Posted by Luke at 8:34 AM No comments: