If you're like me, then you listen to some comic book podcasts.  And if you are really like me, then these are some you should be listening to!

From Crisis To Crisis -- Covering the era between Man of Steel and Infinite Crisis, this long-running Superman podcast details the life and times of the Post-Crisis Superman.  With the new version of Superman coming very shortly from DC Comics, this is the time to check out the one which I -- and most of the folks reading this blog I am willing to bet -- grew up reading.

Xavier's Podcast For Gifted Youngsters -- The X-Men!  From the beginning!  No, really!  This new bi-weekly podcast is covering Marvel's Merry Mutants from the very start, including the pre-Giant Size period which I like so dearly.  Always great to get in on the ground floor of a podcast.

Tales of the JSA -- The Mystery Men of World War II gets the spotlight shone on them in this show.  And it's not just the Society, as the All-Star Squadron also get in on the act too.

Anyone else have some other good ones they listen to?
Posted by Luke at 9:44 AM No comments:

Burger King Gets The Pink Slip 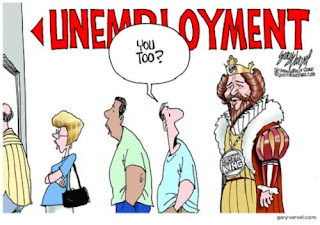 Thanks to Newsbusters!
Posted by Luke at 9:05 AM No comments: 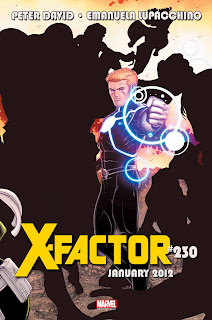 Looks like not only is Havok back from space, but now he is back on X-Factor as well!

What does this all mean?  I have no idea!  The only X-Men comics I have been able to understand in the last decade was X-Men: Kingbreaker, which, appropriately enough, starred Havok.
Posted by Luke at 4:57 PM No comments:

Next week, we see the re-launch of the DC Universe and the assorted rumblings which that entails.  This week, however, it's business as usual.

Action Comics #904 -- Well, if you gotta go, going out with an all out brawl for it all with a Super-Mega Doomsday is a heck of a way to do it.

Godzilla: Kingdom of Monsters #6 -- This will probably be my last issue, which is disappointing.  But those are the breaks.

The Iron Age: Omega #1 -- My favorite Marvel event in years comes to close.

DC released the cover logos for the "New 52" last night, including the logos for the two new War titles, Blackhawks and Men Of War.

Not sure which one I like better.  From what I gather, Men Of War is going to be more of a Modern Military book, while Blackhawks is going for more of a Military Fantasy title.  So the logos seem appropriate to their genres.

The Men Of War logo looks like something from a ModMil video game.  And considering the incredible success (*waves to Mr. Bones*) of those games, I consider this to be a Good Thing.  Hopefully this is the sort of book which can attract the attention of that market, because that would help the book achieve some sales and notoriety.  Blackhawks looks a little more traditional, but I still dig it.  The bird head is a classic element and the stencil-style font works well too.  I think that this title is poised to get some of IDW's GI Joe readers, and like the GI Joe logo this one is striking but not ostentatious.

You can see all 52 of the covers over at Newsarama, including the logo for The Savage Hawkman, which you can see at Being Carter Hall.
Posted by Luke at 11:47 AM No comments: 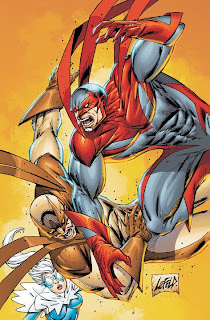 From The Source, check out this interview with upcoming Hawk & Dove scribe Sterling Gates!  We also get to see some new art from Rob Liefeld, and I have to say, it's not half bad.  Certainly Liefeld's style, and certainly a bit over the top, but not nearly as overblown as I remember his art being in the 90s. 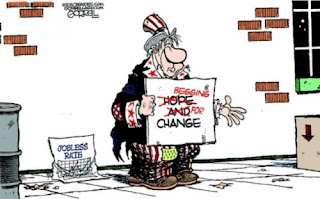 Thanks to Newsbusters!
Posted by Luke at 1:19 PM No comments:

You know darn well that only comics can quell what you're feeling inside!

DC Retroactive The Flash: The 90s -- This is when I got into The Flash so this should be a treat!

Invincible Iron Man #507 -- You have some 'splaining to do, Fraction.

Darkwing Duck #15 -- Time is short on this series, but honestly, did we really think that this is not how the BOOM! Disney line would go down?

Luke versus the Mega Burrito at Papas & Beer, Greenville, SC:

Return Of The Monsters! 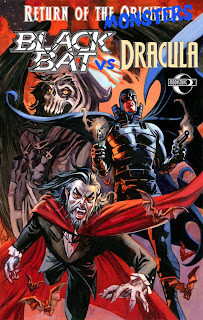 Coming in October from Moonstone, we have a 4 issue event entitled Return of the Monsters, with the Moonstone Pulp Heroes going toe to toe with, you guessed it, MONSTERS!  We're getting Black Bat vs Dracula, The Spider vs Werewolf, Phantom Lady vs The Mummy, and Phantom Detective vs Frankenstein.

The crew over at Moonstone does these classic pulp characters like its nobody's business, plus now we have MONSTERS as well!  Sweet!
Posted by Luke at 9:12 AM No comments:

We're in the middle of our 2011 United Way Campaign here at work, so I am wearing jeans today -- despite the high pushing 100.  Yikes.  Well, at least we have new comics, too.

Showcase Presents: The Trial Of The Flash -- I have heard so many varying opinions on this story that I, as a Flash Fan, had to read it for myself.

Godzilla: Gangsters and Goliaths #3 -- Now this is what I want in a Godzilla comic.  So far.

The Iron Age #3 -- This time-hopping adventure is the first Marvel "event" I have been excited about in a long, long time. 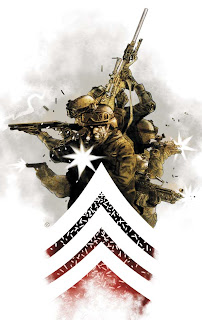 Saw this preview of the Men of War #3 cover over at Newsarama, along with some other November cover previews for the "DCnU" (ugh) Dark and Edge titles.  I love the use of negative space on this cover and how it incorporates the sergeant's insignia.  Sweet!

Don't know how long this ride of DC War books is going to last, but I have to applaud DC for giving a shot to a "dead" genre!
Posted by Luke at 4:01 PM No comments:

What I Read This Week

Godzilla: Gangsters & Goliaths #2 -- Our hero, a policeman betrayed and left for dead, uses Mothra as his instrument of revenge.  This is as cool as it sounds; indeed, much better than the main IDW Godzilla book (see below).

Iron Age #2 -- As a Power Man & Iron Fist fan, I am probably more prone to like the first half of this issue, as they team up with Shellhead.  But the second half, with Iron Man and Human Torch fighting Dr. Doom, was very well done too.  So far I am digging this miniseries.

DC Retroactive: Wonder Woman -- The 70s -- The lead story has Diana undergoing "trials" for denying her powers; the story itself is nothing special but I totally dig J. Bone's offbeat take on the Amazing Amazon.  The backup is a tale from the I-Ching era which, I think, is very representative of that period and fun to read.

DC Retroactive: The Flash -- The 70s -- The new story involves Gorilla Grodd trying to steal Iris away from Barry; kind of oddball but I can see it playing out in the era.  The backup is a reprint of an issue I literally just read a few months ago, part of a Flash/Superman race... why this story was chosen, I have no idea -- it's part 2 of a story, even!

Futurama Comics #56 -- Fry gets the crew stuck working at a fast food restaurant as big as the planet Earth!  Also features an amazing cameo by Iron Maiden's mascot Eddie!

Action Comics #903 -- Reign of the Doomsdays continues as the battle reaches Earth.  Paul Cornell didn't work for me with Captain Britain, but amazingly enough I can dig his take on the Superman Family.  Eager to see how this concludes.

Strange Case of Mr. Hyde #4 -- It's Edward Hyde versus Jack the Ripper in a Victorian blowout to end them all!  Really dug this book and hope to get more from this team.

Godzilla, Kingdom of Monsters #5 -- More nonsense, with the best elements of the story happening off panel while we linger on stupid pop culture references and heavy handed politicking.  I'm done with this book.

Terminator/Robocop: Kill Human #1 -- A great setup, with Robocop awakening from a museum far in the future, as Skynet is on the verge of eliminating the last of humanity.  Should be cool to see where this leads.

Charmed #12 -- The big blowoff to the Neena story delivers pretty much as expected.  It's the revelation at the end which has me more intrigued.

One Reason Not To Blog This Late

Because you come up with ideas like Eric Raymond hooking up with Extensive Enterprises so that The Misfits become a money laundering operation to funnel cash to Cobra in order to fuel Cobra Commander and Megatron's insane idea of finding and unleashing Metlar, Tendril, and D'Compose to different parts of the globe in order to ravage the world's defenses so that Cobra will be able to usurp control of all government while the Decepticons can create enough energon to fuel their conquest of the galaxy.

You might want to put on a helmet because El Jacone just BLEW YOUR MIND.

I think the high in Greenville today is like 101 degrees.  I don't care where you are that's hot!  Also: comics.

DC Retroactive -- Wonder Woman: The 80s -- I read the 70s one last night and was very impressed, so I am seriously considering picking this one up as well. 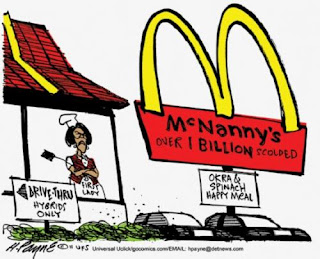 Thanks to Newsbusters!
Posted by Luke at 10:18 AM 1 comment: