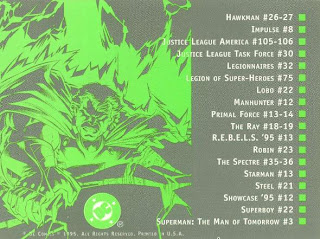 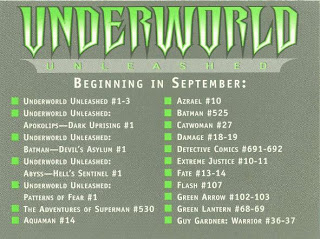 More promotional goodness from the dark days of lore we call the 1990s!  This was unearthed while cleaning out all of my junk which was accumulating in my closet.  I remember the hype for Underworld Unleashed, and thinking it was a great idea (ah to be an idiot 14 year old again), but the only issues of it I ever bought were the Superman ones, as those were the only DC comics I was reading at the time.  Mainly I remember the "real" Lex Luthor coming back, with a bald head and bushy red eyebrows.  But those comics have long been sold.

I don't know how much of the fallout from this series is still around.  I think Major Disaster still has his probability powers (put to amazing use in The Flash by Waid and Augustyn), and Ocean Master still has his magic staff, but beyond that I got nothing.  The other thing I remember being hyped about this series is that it had a special Fifth Color being used in it -- and Five, of course, is One Higher Than Four.  So that makes it better by default.

And while there aren't as many goofy-sounding series on this promo piece as there were on the Zero Hour one, I do have to say that "event fatigue" folks can see that DC was putting out tie-in one shots to suspect events years before Dan DiDio was around.  So there's that, at least.

Anyone out there have some memories of Underworld Unleashed?
Posted by Luke at 8:12 AM

1) I too have been digging through my crap lately, and found this promo card with my Overpower stuff. Since it's over-sized, it's taking a beating, so I was considering scanning it for posterity. Thank you for saving me the trouble.

2) I love florescent inks. Publishers never appreciated how eye-catching they are, even in bad lighting with little shelf space.

3) I haven't read Underworld Unleashed since it came out, but at that time, it was one of my favorite DC crossovers. It was just a gussied-up Acts of Vengeance with a Mephisto swipe at the wheel, but DC villains needed the oomph at the time. I even collected the prequel all-painted, all-villain card set. I'm only missing one chase card from it.

The actual mini-series was by Mark Waid and Howard Porter at his pre-JLA peak. Aside from ruining Blue Devil (and the classic Rogues, for a while) it was pretty nifty. Very ominous mood, and Neron killing Mongul straight out of the gate left quite an impression.

Even better was a tie-in one-shot that involved Alan Scott putting together a team of magicians (pre-Sentinels of Magic) to storm the underworld in search of his wife's lost soul. Jared Stevens was among them. I think Scott Beatty wrote it, and the art by J.H. Williams III and Phil Jimenez was gorgeous.

Patterns of Fear was decent. Oracle looking over dossiers for the newly reinvigorated villains. Pin-ups with profile info and a vignette to connect them.

Dark Uprising was anorexic, but seeing Apokolips drawn in that Italian Neal Adams/John Buscema hybrid made it worthwhile.

There were various affected issues that were solid, but as usual, the bad outweighed the good. I seem to recall the Superman titles being particularly lousy, though.

3) Impact? Blue Devil still doesn't work, and he ruined Kid Devil by extension. It allowed Morrison to turn Triumph into a villain. Star Sapphire and the Predator were finally extricated from Carol Ferris after a few decades. I think Primal Force ended. It contributed to Hawkman's cancellation, after he sold one of his souls. Neron's still kicking around... that is about it.