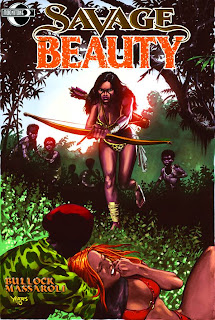 Last year the comics hobby lost one of it's most underrated and under noticed titles: Moonstone's Phantom series.  From the main bimonthly comic to the various supporting miniseries to the illustrated prose Generations title, the Ghost-Who-Walks was brilliantly brought to the printed page by Joe Gentile's crew of Moonstone for 8 years, under the watch of writers such as Ben Rabb, Chuck Dixon, and Mike Bullock.  Then, with the license gone to Dynamite, the Phantom closed up shop at Moonstone and that was that.

Well, Mike Bullock, along with Jose Massaroli, is bringing it back to the jungle, and bringing it for real.  The new title Savage Beauty is set to take the place of The Phantom and keep the trend of strong Jungle Adventure comics going for the small publisher.

Our story opens in Kenya, where a pair of bombshell sisters are working on an article about a game safari for African Adventures magazine.  They are interrupted by a cell phone call from someone called "Eden," who informs them of the actions of Lumus Okoye, brutal General of the "People's Liberation Army," who has been raiding towns and villages "recruiting" for their ranks.  Lumus meets with a French sleaze named Richaud, who is moving Russian rifles in exchange for young African girls.  While Richaud enjoys his latest "acquisition, he disappears out of his tent, only to be found in the bush, branded with the mark of Anaya, the Goddess of the Jungle.  Lumus orders his men to hunt down the "Goddess," but they themselves are stalked and subdued.  Then Lumus must come face to face with Anaya herself...

One of the strongest elements of Bullock's stint working on The Phantom was his ability to translate the real strife going in various nations of Africa into material useable to tell an adventure story.  This gets more mainstream comic press attention for Dysart and Ponticelli's work on DC's Unknown Soldier, but you could always count on The Phantom to address these topics in a mature manner.  That continues here, with the PLA a stand-in for the Uganadan LRA.  This is not new; the "god" HIM used a similar force in several Phantom tales.  But it's a literary tool which works well and is appropriate for the setting.  The story is set in modern Africa, after all, so it's presence is welcome to this reader.  I compare this arrangement to what we got in Dynamite's The Last Phantom, and this approach is clearly superior.  This realistic setting helps differentiate what I call Adventure comics from their Superhero brethren.  (Further, Bullock and Moonstone's longstanding working agreement with the charitable group Invisible Children helps put this depiction over -- clearly this is not done in a way to be considered exploitative.)

On top of this modernist realism is rolled an old pulp classic archetype -- the Jungle Girl.  In a text piece in the back, Robot 6 contributor Michael May talks about his history with Jungle heroes, growing from a love of Edgar Rice Burrough's Tarzan, growing into an appreciation for strong, intelligent heroines such as Sheena and Shanna.  The crew in Savage Beauty is a thoroughly modern rendition of this old concept, but it is also one which would have fit in nicely in a men's magazine from 60 years ago as well.  And as is typical of this generic standard, there are plenty of references to the "Jungle Goddess" and the power of such beliefs.  This is a perfect fit for Moonstone's pulp and pulp-inspired lineup of titles.

Jose Massaroli is a new name to me, so in doing my research I was surprised to find that his work is primarily found on a combination of horror comics (the German series Gespenster Geschichten ("Ghost Stories")) and Disney titles.  Coming in with that unusual pedigree, Jose turns in a strong first issue, showcasing the sexy stars without making it a cheesecake fest.  His art is clean and somewhat spartan, and very grounded -- which makes a good fit for the script.  The colors, by Bob Pedroza, provide the right amount of lush greens with murky blacks to convey the mood effectively.  There's a few awkward panels, but nothing which took me out of the story and nothing which had any real negative impact to the storytelling.

Also included for the cover price is a colorful reprint of a Golden Age "Camilla" strip, by Victor Ibsen.

This is an extremely well put together debut issue for the newest Jungle Girl in town.  Bullock and Massaroli have put a ton of effort into this book and it all shows on the page.  Moonstone continues in taking classic characters and concepts and making them palatable for a modern audience without resorting to camp or satire, and this title continues in that tradition.  Fans of jungle action, Adventure comics, and pulp heroes will definitely want to check this one out - and even if you don't consider yourself a fan of those genres, you should give it a shot anyway.  You might just find something out of the ordinary which hits that elusive "sweet spot."  This may be the start of something big for Moonstone --truly, Avaya is a Goddess who treads upon the mossy earth of her Jungle, and woe to those who would cross her.

Savage Beauty #1 is due in stores in the second week of February from Moonstone Comics.
Posted by Luke at 3:07 PM