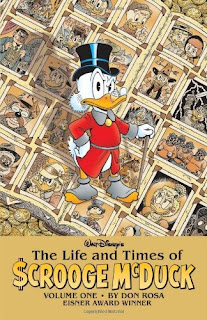 Short and sweet, found at Mr. K's a few weeks back was all three hardcover volumes of The Life And Times Of Scrooge McDuck -- Volume 1, Volume 2, and the Companion.  Between the list price and some trade credit I got all three of them for less than half of the cover prices.  Even Scrooge himself would be happy about that deal!

These stories by Don Rosa tell the life story of Scrooge McDuck from his humble beginnings in Scotland, where he acquires his Lucky Number One Dime,  to making his fortune in America, and are about as epic a story as one can imagine, despite the fact that the star is an anthropomorphic mallard.  I hold true to my belief that if Disney really wants to get in on the "comic book movie chic" scene then they should greenlight an animated feature based on this story.  DuckTales: The Movie was not enough!
Posted by Luke at 4:15 PM

Now that you have the books, you need to READ them to learn that there is no such thing as $crooge's "lucky" Dime. It's his FIRST Dime, but it is in no way lucky. He had if for 20 years before he got rich, and then he did so by hard work alone... not luck. You'll find out when you read.
You'll also learn that this is the ORIGINAL $crooge McDuck as created by Carl Barks. It has little to do with Disney's TV version they called "DuckTales". You'll see that as well.

It wasn't referred to as the "Lucky Number One" in the earlier adventures? It's such a cliched term that I simply assumed. I am also pretty sure that it is referred to as such in some later stories... I just read one in Scrooge #400 from BOOM where Magica is trying to pilfer it (big shock) and I'm pretty sure she refers to it by that name. Not a big deal if I am wrong, though -- I read the first issue of the story, where he receives that dime -- pretty sneaky but I love his response.

I've read some Barks stuff but not enough. I have two collections of Barks and have read some others here and there.

Regarding DuckTales, that show was on before I got home from school as a kid, but the movie and the video game were pretty good. More of a Darkwing Duck fan as far as animation, myself.

I do stand by my point that if Disney wants to make a "comic book movie" they need to make another Scrooge feature.

Anyway, I appreciate your comments and am looking forward to reading these volumes. Thanks for your thoughts!